Home > About > Our Valued Staff
Back

At Chapel Ridge Funeral Home, we understand how difficult it is to lose a loved one. Our compassionate and caring team work hard each and every day to make sure that the members of our community and beyond are taken care of during such a difficult time. For advice on what to do when a loved one is dying, making funeral arrangements, pre-arranging your own funeral, or anything else, please feel free to contact us, 24 hours a day, seven days a week.

We promise to work with you and your family in your time of need to create the perfect memorial service for your loved one. We will be here for you today, as well as tomorrow. 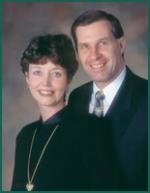 Eric and Susanne Tappenden have lived in Markham for forty years. They are both active members of their church and their community. Eric is a former Board Chair of Markham Stouffville Hospital Foundation, Markham Theatre, the Markham Prayer Breakfast, Markhaven Foundation, the Markham Board of Trade and has served in many other organizations including the Markham Sunrise Rotary Club, Bereaved Families of York Region, the York Region Police Appreciation Committee, and is the Vice-Chair of the Character Community Foundation of York Region, among others. Susanne & Eric have raised their three children in Markham, the oldest of whom, Glenn, has now joined the team at Chapel Ridge.

Born in Toronto, after pursuing a degree in social work, Alex became a licensed funeral director in 1986. During his career in Funeral Service, he has worked in funeral homes in Toronto and Huntsville, he has worked to support Funeral Service as the past president of the Toronto and District Funeral Directors Association. The ability to provide personal caring service is what has drawn Alex to work with Chapel Ridge Funeral Home.

Neil was born in Barrie and began his work in funeral services after completing a university degree in Psychology. After obtaining his funeral director’s license, Neil worked in Japan for 10 years. While in Japan Neil provided training in Western embalming and funeral practices while overseeing a large network of funeral directors and embalmers. He is well versed in all aspects of funeral services and has many years of experience. Neil has a calming presence and always does his best when it comes to serving families.

Vilo was born in Sri Lanka and immigrated to Canada in his early twenties. Before becoming a funeral director, Vilo worked as an engineer. He is very active in his cultural community, volunteering at countless benefits, galas, and speaking engagements. Vilo speaks English and Tamil fluently and is well versed in Hindu rituals as well as traditional Christian and Catholic services.

Michael was born in Hong Kong and immigrated to Canada in his twenties. Before becoming a funeral director, Michael worked in the restaurant business. He is very well known within his community and church groups. Michael is extremely hardworking and dedicated to the families that entrust him with their loved one’s funeral arrangements. He speaks English and Cantonese fluently and is very well versed in Buddhist culture/rituals as well as traditional Christian and Catholic services.

Jordan is a licensed Pre-Arrangement Funeral Director and who specializes in advance funeral planning to serve our families.  Jordan holds a Master’s degree in Leadership & Management (Briercrest Seminary), is a Certified Executor Advisor (Trent University), and licensed/ordained Chaplain. He enjoys travelling and is passionate about the Toronto Blue Jays.  Jordan and his wife have three children.

David was born and raised in Hong Kong and moved to Canada in 1992. David became a funeral director after experiencing a personal loss and having a very bad experience with the funeral home which was supposed to be helping his family. David wanted to do whatever he could to make sure no other families had to put up with similar treatment, so he became a licensed director. David has a soft-spoken demeanor and a servant’s heart. He is always meticulously detailed in the best ways, making sure even the smallest detail does not get missed. David is very involved with his Catholic church and has a lot of experience serving Buddhist, Taoist, Christian, Catholic, and non-denominational funeral services. David is fluent in English, Mandarin, Cantonese, and Shanghainese.

Harjinder, otherwise known as Harry, was born in India and grew up in a number of countries around the world, ranging from England to Africa. Before Harry was a funeral director he worked as an airline pilot. Harjinder is very active in senior groups, and volunteers his time freely to many Sikh and Hindu temples around the GTA. Harry specializes in arranging Sikh and Hindu funeral services but is always willing and able to assist any family’s needs/requests. Harry is fluent in English, Hindi, Gujarati, Punjabi, Urdu, and Swahili.

Jin Hwa Park was born in Korea, worked as a journalist after graduating from university. After experiencing the sudden loss of her mother, she became a funeral director to help people at their most difficult time. She has worked closely with major Korean churches and community groups in the GTA area. Her passion for helping people is not limited to funeral services. She attended the Grief Counseling Course at George Brown College and has run a bereavement support group at St. Andrew Kim Catholic Church. Jin is fluent in English and Korean.

Born and raised in Red Lake, Sienna began her career like many of us in high school as a funeral director’s assistant. She moved to the GTA to attend Humber College and ended up staying for an apprenticeship at a very well regarded firm in Toronto. Sienna has a very caring heart and loves supporting both her colleagues and the families she serves. Even though she has only been licensed for about a year and a half, Sienna continues to impress everyone she comes into contact with.

Born and raised in Sault Ste. Marie, Matthew started his career in funeral services in high school working as a funeral director’s assistant. He has a great attitude for this business, always looking to go above and beyond the family’s requests. Matt never shies away from putting in extra hours to make sure families are well served. We appreciate his tenacity and outgoing personality.

Born and raised in Alliston, Roger became interested in funeral services after his father passed away suddenly. He wanted to help people through the most difficult times while being able to relate and empathize very naturally. Roger has a very positive outlook on life and work, always going out of his way to help his colleagues and the families he is able to help serve.

Sean was born in Toronto and raised in Markham, he studied music in university before going to Humber College for Funeral Services. Sean has an amazing aptitude for helping people. He is quite often the first to arrive and the last to leave the building. He always does his best to make sure families are well served, and attended to personally. Sean is involved with the Unionville Curling Club and loves to play and watch major tennis events. We are very privileged to have him at Chapel Ridge.

Katrina was born and raised in the Stouffville/Markham area, she studied hair and makeup at Seneca College and has been a great asset at Chapel Ridge. She is very detail-oriented and has a very strong grasp on all aspects of funeral services. Katrina has worked at Chapel Ridge for about 3 years and continues to impress all of her colleagues and the families we serve with her kind heart and diverse skill set.

Endy was born and raised in Hong Kong, moving to Canada when he was in his early twenties. Endy is an extremely hardworking individual. He always tries to exceed the family’s expectations when it comes to our services. Endy is fluent in English, Mandarin, and Cantonese. He is very well known within his church groups and volunteers regularly. Endy has been a great addition to our team, and we appreciate his calm demeanor and willingness to go above and beyond the call of duty.